So in reality we all come to the North Shore to get seen. Stephanie is some North Shore homeless women that sells Lemonade at the Beach at Pipeline. She spends all day at the beach with the biggest smile on her face and is open to coming up to anybody. Came up to me today at the beach and I had the pleasure of talking to her. Told her that she had become a north shore celebrity just by being in the right spot at the right time.

She told me she got punched in the face yesterday by a local girl because kids where harassing her for being on surfline.com and she was telling them to get away. The lady weights maybe 90lbs and is super sweet, couldn’t see her harming a fly. It just goes to show, that everyone is fighting to get scene here and it doesn’t end in the water. 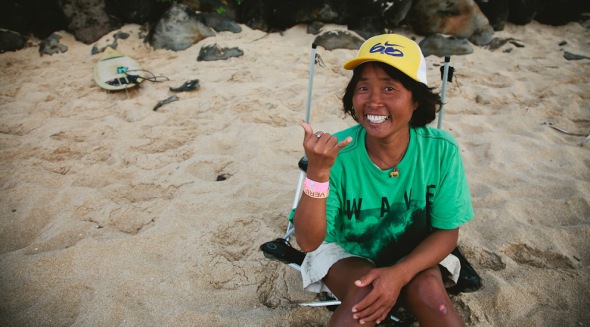 And her Video on turkeymelt.com (she shows up half way playing with Alex Grey and Timmy Reyes

This entry was posted on December 23, 2011 by the surfing photog. It was filed under fun, hawaii, North Shore, Photography, Pipe Masters, Pro's, VANS World Cup .