The Mountains We Choose

It’s 5pm and I have 45 minutes of daylight left, most people would just enjoy the sunset and called it a day. I grabbed my camera and swam the 100 meters to shoot because I knew my buddy Mike was out. I realized once I got out, a rain squall was quickly approaching and was going to destroy any hope of usable color. Regardless these are the Mountains we choose to ride and I feel images like these portray surf culture better than the glossy advertising magazines.

It’s always comforting when you have friends that can surf, here’s mike throwing a hack right in front of me. Pretty much making my long swim out worth it. thanks mike 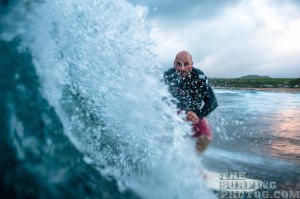 Then it got crazy windy 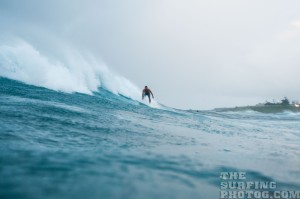 Then it started to pour 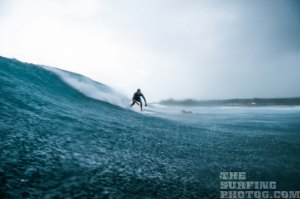 Then everything started to fall apart

Honestly I don’t know how I focused on this last photo, I attached the original next to the edited one to show how dark it actually was… Try in your house to get a photo of someone walking with a shutter speed of 60,  f/stop of 2.8 and ISO of 500… 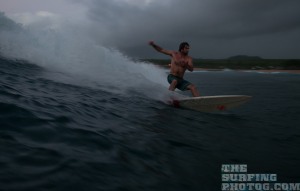 I’m not sure if there is some other meaning for Andrew WK’s song “I Get Wet” but it excites me and I’m not ashamed.

Ho’okipa Beach park on the North Shore of Maui is the closest thing to my home break, Not saying I’m a local, but I have spent more days here than any other beach in the world in the last few years. Personally I like it a little bigger but if people are ripping I’m going to go out with my camera.

I haven’t been in Maui since the winter of 2013 but when I swim out with my camera it feels familiar. I know the reef, how the spots break on different swells and how to get in and out of the ocean safely. Maybe I should have been more cautious, It been a few month since I’ve seen good surf but that didn’t stop me. I swam out full steam and got a close as I could with a 17-50mm lens… Maybe too close.

All the shots today were at Pavils (It’s short for Pavilions, but I was assured multiple times no one uses that name but feel free to shorten an abbreviation to an abbreviation and call it P-Vil), there was a PWA (professional windsurfing association) event today so all the surfers were forced to the most eastern section of Ho’okipa.

This is the “Picture of the Day”, It’s clean, crisp and logo free (well except for mine, but I’m not corporate)

I guess I was excited to be back because I took more close-up than anything else, maybe I should have used my Fisheye Lens

I was only scared once today when this 58 year (it was his birthday on Saturday, I talked to him on the walk to my truck) came wobbling towards me, Not saying he wasn’t charging but on this wave I thought I was getting a rail to the face.

It was a surprise to swim out and see another Photog, Raja (http://www.travelingkameleon.com/)… You don’t get a lot of interest in the small-medium surf on a Thursday morning, but it was nice talking to someone that knew what they were doing.

Raja was mostly communicating one surfer (Lucas), when you go out to capture pictures with a photographer, you try to throw maneuvers in front of him so I didn’t connect with Lucas that much because our timing was not in sync. Luckily Raja missed a few sections down the line because he was shooting Fisheye and Lucas came screaming down the line.

In my last post I gave a shout out to my shaper in Portland, OR (www.Blackfernsurfboards.com), Mike Hall not only built me a custom board in 3 days, after he found out I was a photographer he agreed to meet me at the beach to show me how much Gnar his board could Shred (“Shredding the Gnar” is my favorite term, you might as well get used to it).

I may have forgot to mention to Mike that I really only love heavy, chunky technical waves and really don’t care for pretty soft long rides. Unfortunately Short Sands Beach on the coast of Oregon is the latter. You go to short sands to learn how to surf and have a pretty day on the beach with your friends. Mike can shred some heavy Gnar but most of the other people surfing this day probably drive Minivans (not the cool crossover kind).

Oregon literally has the most consistent surf in the country and I couldn’t believe the level of surfing I was trying to film, it wasn’t pretty. Maybe I shouldn’t talk trash but it’s so easy. Ok I’m only going to show two utterly gross attempts to surf then i’ll bring back the gnar…

Was this guy tied to the ground?, how do you not even gain any forward momentum… I couldn’t believe this waste of wave 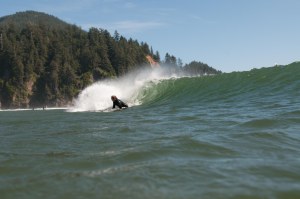 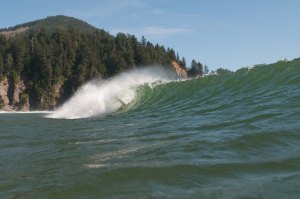 I watched this guy butcher 10 waves already so I should have known but he had such a stylish arch to his take off turn I thought he would actually try to make a section… Nope he just stood there and let the wave smack him in the face, nice!

Thank you for hanging in there, Here is some gnar… Mike on my board, he mastered this skate style chop hop floater on his back hand… either that or he was trying hard to show off his logo on the bottom of the board 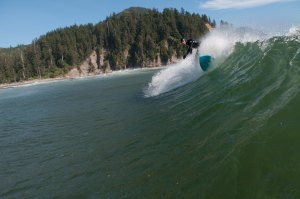 Ok I don’t do this often… But I have to publicly shame this Orange hat dude. “Donkey of the week” (he’s luckily this happened a few months ago because I would have dedicated a whole post about talking trash about this guy). Obviously this guy is “A Local” but if your burn little kids trying to learn, your the kook (it’s not Malibu). Not to mention the “I’m too cool to care” attitude but I’m going to hover around the guy taking photos all day, give it a rest. I can admit you can surf but don’t be that guy

New Board Shout Out

BIG shout out to my shaper Mike Hall at http://www.Blackfernsurfboards.com&#8230; I gave him 3 days notice to make me a board before I came to Portland, OR for work. He not only delivered, he surpassed all expectations… He took my input and tweaked his “Bean V2” model (skate inspired concave deck with volume in all the right places) I asked for bit more rocker in the nose (I rock the late take offs) and a little less volume then the standard size model…

Check out those lines!!! the concave deck makes for radical turns and less need to grab rail during heavy turns or foam ball barrels 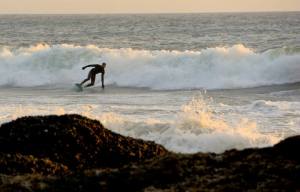 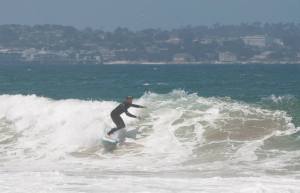 Thanks Mike, hope I do your creation justice

So I mentioned in my last post that I only took my camera out once during my 2 months in New Zealand. There were surfers at some of the surf breaks but (this might sound mean…) they weren’t worth the effort. Mediocre surfers make for mediocre pictures and I would be forcing lower quality pictures. That being said here are the Tawharu’s…

I love stylish surfers, in my option style will always be more important then size of waves or radical maneuvers. I was surfing at Whales Bay in Raglan (the iconic left handed point break in Endless Summer) when 3 surfers all paddled out together (father and his two kids). The youngest caught an inside wave that everyone else in the line up passed on and destroyed it. I was so excited, I had been in New Zealand a month and I finally had a reason to get my camera. I might have come on a little strong following his kids so the father came over to introduce himself. Luckily he was just as excited as I was and let me take all the photos I wanted.

Instantly I realize his son was not only comfortable with my camera but was pumping the wave just to make sections in front of me. Insert Jonas Tawharu… One of New Zealands Up and coming Groms

I feel a little bad because his sister could rip too but I really could not connect with her on photos. The break had a lot of take off points and I think if she sat next to Jonas, I’m not sure she would have gotten a lot of waves… Introducing Elin Tawharu 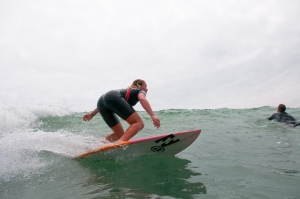 The sun came out of nowhere and blew out 10 frames before I could adjust the for the light, I feel really bad because she killed this wave and I missed 90% of it (I still had to make it B&W because the exposure of light destroyed the color)

And last but not least John Tawharu, he keep taking off on the inside and pretty much surfed clean up (I guess you have to when both of your kids can surf circles around everyone in the line up). He would come over after every wave and say something nice about his kids or questions about me. Super nice

Ok now that we gave the rest of the family some attention, we will give Jonas the spotlight he deserves, starting with the sequence from the first picture in this post (I felt like such a beginner, loosing sight of the horizon and just following the surfer) 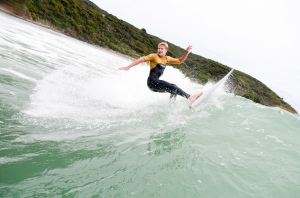 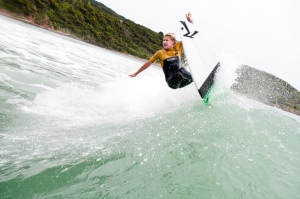 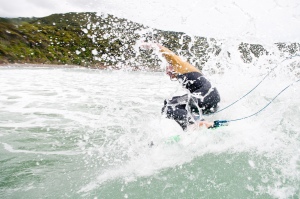 It really wasn’t even that good of a day but he made the most out of every section and close out, charging like he was in a 35 minute elimination round

Super stoked on every wave, little did he know he made such an impact on my trip…

I sent the father all of these photos and he invited me on every surf trip they had in New Zealand that summer. Sorry it took so long to thank you publicly but I guess I was a little bummed that this was my only day shooting in New Zealand

Where have I been for a year?

So If you were an avid follower of the “The Surfing Photog” you would notice I seriously dropped the ball. The winter of 2014-2015 I went to New Zealand and had one of the most epic surf adventures I have ever had! That being said 80% of the beaches I surfed I was the only surfer to be found (With the exception of New Plymouth, Raglan and Gisborne). 20-30% of my travel backpack was filled with heavy camera equipment that never got used (except one day in Ragland… I’ll post that after this post).

Maybe I should have set up my camera and gone in to take pictures of pretty empty waves, glorifying the wonderful empty breaks across New Zealand’s North Island but thats not my style. Firstly I don’t want to spoil anywhere in the world that has waves with no people, thats why all the cell phone pictures I post here will not be labeled. Secondly I take pictures of the sport of surfing, If you want pretty desktop picture of breathtaking geography… I’m probably not your guy.

I’m BACK on Maui for at least a few weeks and I promise I will generate content for you, so let the trade winds be kind and swells abundant. Mahalo for waiting, I do miss all the wonderful support I get from my online community. 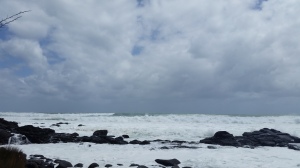 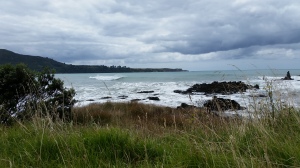 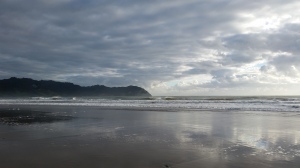 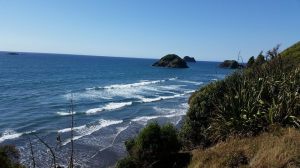 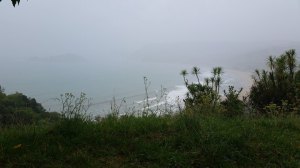